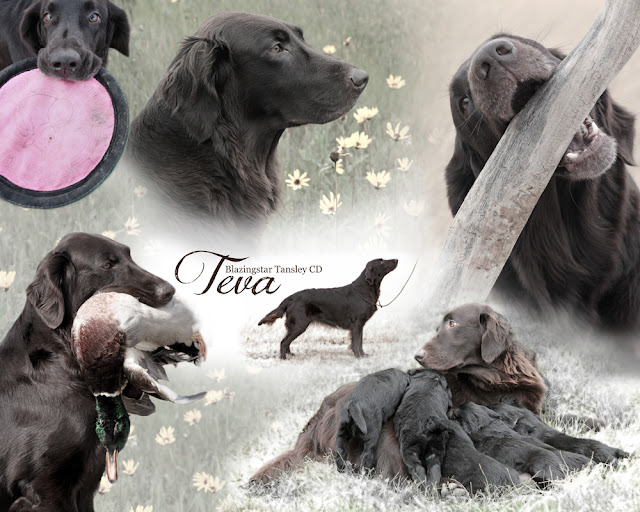 In the middle of January 2013 she showed symptoms of a fever and blood work suggestive of an infection.  Being intact, pyometra (a uterine infection) was suspected.  An ultrasound was scheduled for the following day.  Based on her breed and the ultrasound, the specialist diagnosed her with multiple tumours, most likely being histiocytic sarcoma.  They reported that the spleen, liver and possibly the intestines were affected.  Prednisone was prescribed.  After a long day at the clinic, her devastated owners took her home where she could be comfortable.

After a few days, Teva went downhill quickly and she was put down five days after her ultrasound.  As her breeders, and because Teva had produced one litter for us, we asked that an autopsy be performed.  Teva’s regular vet performed the autopsy.

The results were shocking.  The vet found a large mass (>15cm) of infective and other material. In the mass was a substantial bundle of surgical gauze.  The vet collected and submitted numerous samples for pathological analysis.   The gauze must have been left in her abdomen after her c-section to remove her 8 puppies, almost 3 years earlier.  A truly terrible mistake.

The pathology report showed that there was in fact some cancer present  – hemangiosarcoma.  In her vet’s opinion, the primary source for Teva’s cancer was the mass that had formed as a result of the gauze.  While her spleen was normal (contrary to the ultrasound findings), cancer had spread to her liver.  Scientific literature led us to discover that cancer (including hemangiosarcoma) can be triggered in both humans and animals by the presence of foreign bodies, including gauze.

More About Teva
Like most flat-coated retrievers, Teva had a boundless zest for life.  She was an early riser that met every day with optimistic wags.  Teva was driven to retrieve everything and anything, but had a special passion for frisbees and exceptionally large sticks (logs?). Food was an important part of her life and she didn’t meet too many foods that she didn’t like, including all sorts of fruits and vegetables.  Being fed on time was a big priority in her life.

Teva’s speed on land was legendary and something she passed on to her puppies.
Super speedy out to a bumper or bird, she also raced back to her owner at equal velocities.

A lovely example of her breed in both mind and body, Teva was shown occasionally and was just one point away from finishing her Canadian Championship.

Inside, she was a sweet and gentle soul and epic couch-snuggler and bed-warmer.  As a mother, she was one of the best – attentive, gentle, playful and always eager to spend time with her puppies.

Her zest for life, great personality and sweet nature is greatly missed by everyone who knew her, but most of all by her owners, Darren and Michele.

Posted by Blazingstar at 2:12 PM 5 comments: